I part exchanged the Mini after a long look at available small cars. I had to use the car for work, I couldn’t afford a bigger car but it had to be able to do long journeys in reasonable comfort. In the 60’s even the modest journeys could be very slow; for example my run to see my parents in Kent from Lincolnshire didn’t benefit from the M11, the M25 or the M20 and too much of the way was essentially local roads. In fact, I often used to drive straight through London to save time!  So the car needed reasonable seating, not too noisy and good to drive.

So what to choose? I mused over an NSU Prinz, quickly dismissed an Anglia for being too dull, and was warned off a Vauxhall Viva because of handling and rust, but that applied to a lot of 60’s cars. I was most attracted to the Hillman Imp and managed to source a used slightly upmarket version, the Singer Chamois. The Chamois was rear engined, had a cut down Coventry Climax derived aluminium engine, and featured a number of innovations (see https://en.wikipedia.org/wiki/Hillman_Imp for interesting details). I found it quieter, better to drive and faster than the Mini, and the free revving engine mated to a beautifully smooth gearbox were outstanding for the day. It was relatively well finished, well equipped and had the benefit of being introduced after the significant teething problems of the Hillman Imp had been resolved. I liked it, but despite motor sport success (winning the Tulip Rally in 1965 and the British Saloon Car Championship in 1970, 1971 and 1972) sales of the Imp tailed off under the cloud of a poor reputation for reliability. So the Imp was always overshadowed by the Mini and this was a pity for such a competent car. These poor sales were an important contribution to the end of the British ownership of the Rootes Group with its takeover by Chrysler.

The Chamois handled very well in almost all conditions since the suspension design counteracted the rear wheel drive tendency to oversteer but I did get caught out once. It was a dark and rainy night in mid-Devon following a day of rain, quite tricky conditions. Driving into a dip in the road I didn’t pick up the fact that there was a flood. With a light front the wheels went into aquaplane mode and the car slewed off the road to end up hanging over a sheer drop to a small ravine. As I paddled through the flood and to the nearest farm to find a phone, I reflected on the downside of rear engined cars (though I guess my Mini would have also have left me stranded due to its water susceptible electrics). I also decided that it might be a good idea to actually wear the new-fangled seat belt that was fitted to the car. After numerous attempts, the law on wearing seat belts was only introduced in January 1983, but anchorage points were a legal requirement from 1965 and my Chamois had actually been fitted with static belts. 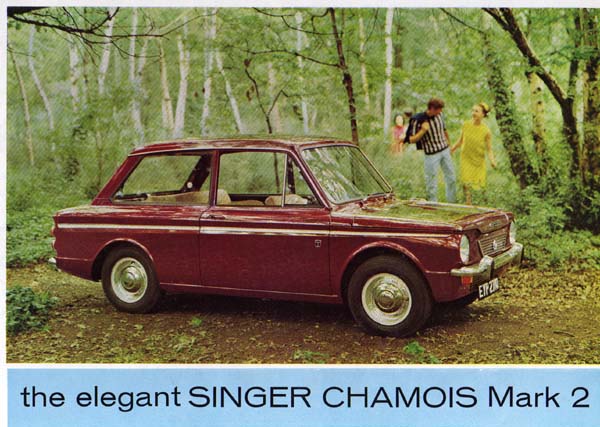 I kept the little Chamois for a year because I went abroad, but it never missed a beat in 18,000 miles. When I sold it it taught me another valuable lesson; never to sell to a friend. Having sold to the friend and pocketed the cash, he gave me lift to the station so I could get home. On the way the throttle linkage broke – very embarrassing! He moved away and I went to Iran so we lost touch but many years later I heard he had survived a serious car accident at about that time; I do hope the Chamois saved his life rather than caused the accident.

The Imp and its derivatives are another example of a good British design let down by not enough development – by the time all the early issues were resolved, its reputation had destroyed sales.